If you have been in an collision or a confrontation with a driver, see here:

There are many websites and books that deal with bicycle safety and tips for safe riding in traffic. Here’s the short of it:

You should have functioning equipment. Nothing’s going to help you if your brake cables tear or your chain falls off at a critical moment. So make sure your bike is well maintained, check your brakes and tire pressure before you leave, and if something doesn’t feel right, fix it right away or take it to a bike shop. The single most important safety aspect when it comes to cycling in traffic is visibility. When you’re riding at night or in low visibility conditions (rain, snow, low light), it is imperative that you have functioning lights. The law requires you to have at least one (but not more than two) white headlights and a red rear light, as well as a red rear reflector. Reflectors in the spokes and on the pedals aren’t a bad idea, either. Reflective strips on clothing, packs, ankle straps, are also useful. But remember that on the pathway, there’s no windshield between your blaring flashing headlight and other pathway users—so be courteous and turn your lights to steady mode and angle them down. It’s a good idea to wear a cycling helmet. It’s not required by law, unless you’re under 18. Make sure your helmet fits you properly and meets industry safety standards.

Where (Not) to Ride

It is probably obvious that you are safer on quiet neighborhood streets than on busy streets, safer on pathways and in bike lanes than when riding in traffic. Check the a Bikeways and Pathways map to find a suitable cycling route for you. When you are riding in traffic, go in a straight line (no dodging between parked cars) and keep to the right as much as possible but:

Famously, Calgary has one of North America’s most extensive pathway networks in North America. Pathways are a relatively safe place to ride a bicycle, as there are no cars (except where pathways cross roads) and pathways are also never adjacent to building entrances or parked cars.  Because pathways are, for the most part, shared with pedestrians (and skaters and runners), you still must exercise caution when using them, especially at night. You should be especially careful when crossing a roadway.  On a bicycle, you do not automatically have the right of way over vehicles on the road you’re crossing, unlike as a pedestrian.  If you dismount and walk your bike across an intersection, you’re a pedestrian, and have the right of way.  Note that speed on pathways is limited to 20 km/h.

On the other hand, it is generally dangerous to ride your bicycle on sidewalks, especially where sidewalks cross streets at every block, there are driveways, building entrances, and parked cars. You’re liable to hit or get run into by a pedestrian, get hit by an opening car door on the passenger side, or get hit by a car if you bike through crosswalks (drivers can’t see you behind the parked cars, won’t expect a fast approaching bicycle, and you’ll likely be in their blind spot if they turn right across the crosswalk). A very high percentage of car-bike collisions happen at intersections when the cyclist is coming off the sidewalk. In Calgary, it’s illegal to ride a bicycle on a sidewalk (unless it’s a designated pathway, you are under 14 years old, are delivering newspapers, or are a Peace Officer on duty).

How do you tell if something’s a pathway (ok to ride) or a sidewalk that’s not a pathway (not ok to ride)?  It’s not always obvious, but:

Always obey posted signs, speed limits, and again: be very careful at intersections: motorists won’t look for you, sometimes won’t be able to see you, and you do not automatically have the right of way in crosswalks like pedestrians do.

Cycling on pathways is subject to very much the same rules as regular traffic. You should:

There are numerous resources online to learn about cycling safety, whether you’re riding on shared pathways or on the roads.

The regulations governing cycling in Calgary are:

According to these rules and regulations, 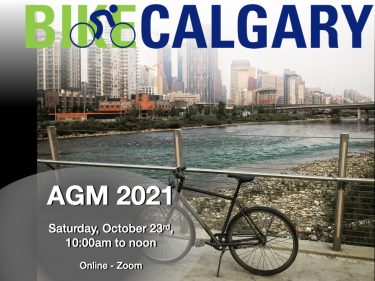